SCADIA SAS it´s a consultancy company specialized in airport architectural and engineerin desing, we are a Colombian company consolidated and recognized in air sector through our participation in projects for government, private operators and airline initiatives for the last 25 years. 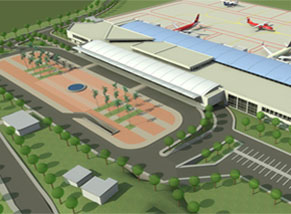 SCADIA S.A.S develops airport studies for Terminals and facilities such as: 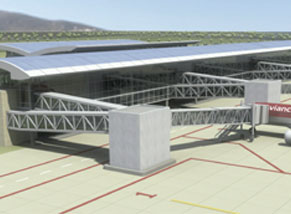 | Blog-EN
Client: AECOM - 2018 / 2019The architecture and technical coordination of the buildings were developed for the new international airport in an APP initiative. The main activities were related to BIM development of architectural project, specifications and technical coordination with the other specialties associated with the design project. The following characteristics of the project are highlighted: •  Passenger Terminal •  Tower and Control Center •  Cargo Terminal •  VIP and FBO Terminals •  Administrative Building •  Technical Support Buildings The duration of the project was 9 months and involved national and international design teams throughout their development. DIS_FACT_SKCG
Read more...

| Blog-EN
Client: AIRPLAN - 2018 The development of architectural designs was carried out within the project of adjustment of commercial zones in the passenger terminal building of Enrique Olaya Herrera Airport in Medellin - Colombia, for the AIRPLAN S.A concessionaire.   It included the design of access to security control in boarding room, bathrooms, VIP lounges and commercial area. The project included the development of architectural drawings and plans, as well as the elaboration of conceptual images of the project in 3d representation.The general areas of the project were the following: Boarding rooms 1,916 m2  - VIP room 316 m2  - Commercial areas 432 m2  - Safety zone RX 132 m2  - Service of Bathrooms 113 m2   DIS_TER_OH_2018_COMERCIAL
Read more...